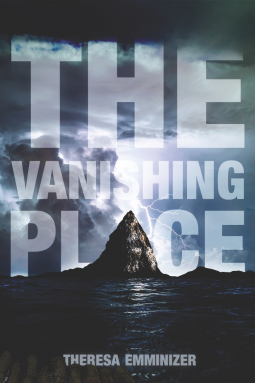 Thank you so much to West 44 Books for giving me an advance reading copy (ARC) of Theresa Emminizer’s The Vanishing Place in exchange for an honest review via Netgalley.

Written in free verse, The Vanishing Place is told through the four perspectives of the four friends washed ashore in an unfamiliar island after a rough night at sea. Two sisters, two best friends. One dies, one does not want to leave, one wants change, and one wants to leave. Will they ever be rescued in The Vanishing Place?

I’m not sure if it was my ARC copy but it ended when the story has reached the tip of the wave. I was looking forward for more when I was met with the acknowledgement page. Will they get out of the Vanishing Place? What is the Vanishing Place all about? I thought it was fast paced, the tension between the characters built up beautifully until it ended. Was that intended or was it only my copy? Because if it was intended, that would be a loss. I think the story has so much potential. Each backstory of the characters are solid, giving them each agenda that pushes them to fight for survival. I also would like to see what The Vanishing Place is all about, and if they would really die in that island or get rescued. As I said, it had so much potential and I really hope it’s just my copy that was cut abruptly.

What I didn’t like was how Eve was automatically pulled into a love triangle. Was that really necessary? I mean sure, after weeks of being stuck in an island with two boys and one girl, they’re bound to have no choice but to be familiar with each other and attend to their human needs. I guess it’s logical? Although the story did not dwell on it too much.

I think the delivery of the story was nice. I haven’t read any book with a similar delivery. I actually didn’t know this would be a poem until I read it. No regrets on that though. I recommend this book to anyone who loves fast paced mystery/thriller books (I think it’s mystery/thriller). Meanwhile, I only gave 3 stars due to the copy I received. I’m not sure if that was how this story is supposed to end but I disagree. Until then, it will only get 3 stars from me.

One thought on “The Vanishing Place”

THE CHRONICLES OF HISTORY

READING INTO THE PAST ... WELCOME TO MY HISTORY & BOOK BLOG!

Because paradise is a library

I share my expertise and experience to cope up with constant struggle of Body, Health and Mind. I am a certified Life, Yoga and Health Coach.